The address of our representatives of legal counsel and plaintiff corps 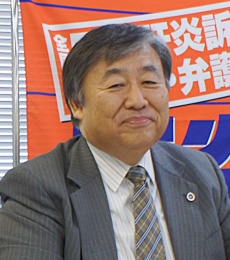 It is said that there are about 1,300,000 or 1,500,000 hepatitis B virus patients including liver cancer developed and asymptomatic patients. Of these, more than 400,000 infected were by the consecutive use such as the syringes in the group vaccination or secondarily from mother transmitted to and the country government is responsible to those damages of victims.
Not only it was recognized by Supreme Court judgment, but also the government accepted this. And the country government concluded the basic agreement with plaintiff corps and legal counsel on June 28, 2011. In that agreement government made apology and promised compensation, continuation of discussion for measures of prevention of recurrence, the including of setting the third-party organization. The special measures law was enforced in January, 2012, too.
We think that all nations should be examined virus inspection to solve the problem of the viral hepatitis including hepatitis C, and that it is necessary that many victims speak out even by one person. 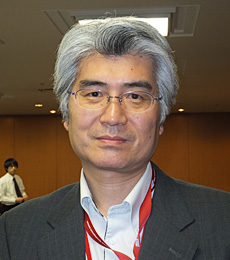 I will expand "the cry of the life" of the victims and never let tragedy be repeated!

I succeeded the representative of the hepatitis B suit plaintiffs’ corps of the whole country from Mieko Taniguchi on June, 2013 of the 2nd anniversary of the basic agreement.

I had liver cancer suddenly in 2009 and was hospitalized six times. I was removed hepatic cancer of the size of a clenched fist surgically and a cancer was left afterwards and it recurred again and felt painful by the treatment of the anticancer drug. As for the survival rate, the survival rate was said from a doctor to be 50% for five years for, 10% for ten years and I continued fighting against illness while many times in the way I scared for a recurrence and lost hope to live.
Every person infected with hepatitis B has a spicy feeling. Not only fighting against a disease but also living is hard. What we have to suffer is not unavoidable in any way. If the government properly responded, and did not do sloppy things like using syringes in mass vaccination, we could not have done such a painful thought. This was also revealed from the "Verification of spread of hepatitis B infection by group vaccination etc. and the recurrence prevention study meeting" (this homepage "Future Target" https://bkan.jp/en/goal.html) which I have also participated in this past year.

The victim infected with hepatitis B virus by a group vaccination is said to be 40 tens of thousands of, and those already died comes a lot.
The requests for us who had a miserable experience are relief of all the victims as early as possible, enhancement of permanent measures for all the viral hepatitis patients, investigation of the truth, the prevention of recurrence, and we hope no one in the world taste the pains like us in the future.

Please join to our plaintiff corps and the legal counsel who were working from the beginning and from now of this fight by all means!